Walkies is always intoned as a question (walking around a field or two is a collaborative endeavour, after all – a joint decision even if a predictable one); the response comes always via immediately expressive eyeballs (she would fold her arms at a policeman if she could, to show willingness) and, today, came accompanied by a sneeze and a lightning-quick circle on the spot. I needed a walk as much as she did; if indoors is deadlines and computers, stress and anxiety, outdoors is space and wind, trees and open sky. So off we went. I carried her over the initial muddy bit (she is too small, too pristine and too fair to want to wade through it, though she probably would have, with raised eyebrows as a challenge [it’s I who’d have had to bathe her], if I’d not intervened) and plonked her down again for her parade.

Walking my dog is often a sort of parade; she is a bit of a princess, even while sniffing and widdling all over the place, and is met with admiration and ecstasy wherever she goes, mostly because she looks like a cross between a small piglet and a fairy. She is a long-haired chihuahua, built for seasonal jumpers and a penchant for puppy food (by which I mean she refuses all else). When I occasionally mention her on dates (looking after her is an excellent excuse for leaving one early, if necessary), I am on the alert for any judgement; it is an interesting thing that dog breeds can be gendered (as baffling, really, as the fact that colours so often are); I admire a man who can admire a chihuahua and not have to check he’s still got a willy. END_OF_DOCUMENT_TOKEN_TO_BE_REPLACED

We were backpacking. Always backpacking – or often. We had no bags with us but were in transit; I know this. Sometimes I wake up remembering how we were, him sitting behind me in a bus, not quite there, not quite not there; me unwinding earphones. This time, we were moving through some station or other, bagless again, not noticeably so, just factually so; except the station wasn’t making much sense – there were trains, I was certain, but also planes and buses and, perhaps, boats. And the central part of it was sunken like the centre of an amphitheatre, its low, vast base a stage, covered with bright green lawn and families picnic-ing. It was some kind of open-air stadium; some foreign, metropolitan quirk; amusing to us that that a station would be so multi-purpose like this; so shaped like a giant amphitheatre; like some great festival we were swinging our way around in this country I don’t know what. We were in the thick of the space, wandering, moving, winding between, wasting time in the midst of dotted groups and families. He was behind me, dawdling, pointing things out and I turned to smile, to say something, or to hear him say something, perhaps wondering if we should find which train or a boat or a plane to catch; perhaps about to suggest we go up the steps to the real part of the station, when, 100 metres behind his shoulders I saw a thing (some temporary thing; maybe a food van) explode. Bang, and the world was a heady, cosmic mess. END_OF_DOCUMENT_TOKEN_TO_BE_REPLACED

While developing the first products for my natural skincare range, Leafology, I learned that, here in the EU, we are not technically allowed to label our cosmetic products as being ‘not tested on animals’. Unofficially, it’s because we ought not imply that other products are testing on animals, since to do so is illegal; officially, we can’t cite that claim with ultimate confidence since, sadly, the reality is that most if not all of the component parts of a lip balm, cream, gel or lotion will have been tested on animals at some point in history. Therefore, to say that a product has not been tested on animals is misleading in the sense that it can’t always be entirely true, or at least, not if a product is considered the sum of its parts. However, it is at least true that the final product will not have been tested on animals and this can be claimed (thankfully) with absolute certainty; no one will have smeared my body balm behind the ears of a rabbit before it was approved for the market. Sadly, in some countries (notably China), the opposite is true; a product not only can be tested on animals before it ends up in the shops; it must be.

We can allude on our packaging that we are against animal testing (and I allude to such with the use of my hand-drawn effort, below). 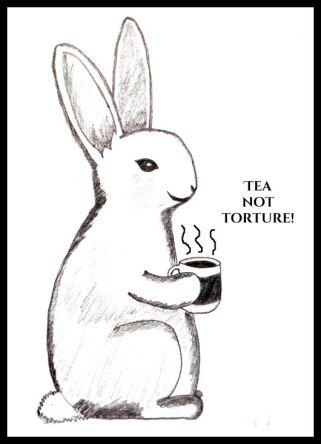 The notion of testing on animals is representative of a wide beam of ludicrosity which spans the repulsively cruel (I won’t go into this here because I think it’s needless, and horrific, and obvious) to the plain daft. Daft because the effect of certain cosmetic ingredients on the skin or hair of an animal simply doesn’t enlighten us much about the possible effect on the human equivalent (since they are just so different). The acceptable levels of allergens and sensitisers can’t necessarily be assumed as equal; our human skin varies even between sex (men’s skin is thicker than women’s; the composition of products must be assessed under separate guidelines because of this), so imagine how much it can differ between species. Testing shampoo (etc.) on animals is pure nonsense both practically and poetically. END_OF_DOCUMENT_TOKEN_TO_BE_REPLACED

At a writing event the other day, someone read something out during which the main character licks their third left molar ‘and does all the other things we do when we’re uncomfortable’. As the rest of the paragraph washed over me, I automatically licked my own (having calculated at lightning speed which molar the author meant; third from left, third from right?) and observed several others around me discreetly trying the same. Yes, we all agreed in silence while not meeting each others’ eyes; this is what we do when we’re uncomfortable. We lick our third left molar.

Details make for good writing, which is all about truth, whichever brand of truth particularly on offer.

I looked up a book today after a personal recommendation (a book recommendation is a sort of gift; it should never be fobbed off lightly) and read some online reviews. The book had been shortlisted for a massive international prize. ‘Boring boring boring’ said one dissatisfied customer under a 1-star review (zero isn’t an option, as another reviewer noted) entitled ‘Stupefyingly boring’; she went on to announce that she ‘will never again buy novels about men living inside their own heads’. At this point, and after some other reviews (some adoring, some more mixed) mentioning themes of displacement and genre-defiance, I was positively salivating and I couldn’t order it fast enough. END_OF_DOCUMENT_TOKEN_TO_BE_REPLACED