Walkies is always intoned as a question (walking around a field or two is a collaborative endeavour, after all – a joint decision even if a predictable one); the response comes always via immediately expressive eyeballs (she would fold her arms at a policeman if she could, to show willingness) and, today, came accompanied by a sneeze and a lightning-quick circle on the spot. I needed a walk as much as she did; if indoors is deadlines and computers, stress and anxiety, outdoors is space and wind, trees and open sky. So off we went. I carried her over the initial muddy bit (she is too small, too pristine and too fair to want to wade through it, though she probably would have, with raised eyebrows as a challenge [it’s I who’d have had to bathe her], if I’d not intervened) and plonked her down again for her parade.

Walking my dog is often a sort of parade; she is a bit of a princess, even while sniffing and widdling all over the place, and is met with admiration and ecstasy wherever she goes, mostly because she looks like a cross between a small piglet and a fairy. She is a long-haired chihuahua, built for seasonal jumpers and a penchant for puppy food (by which I mean she refuses all else). When I occasionally mention her on dates (looking after her is an excellent excuse for leaving one early, if necessary), I am on the alert for any judgement; it is an interesting thing that dog breeds can be gendered (as baffling, really, as the fact that colours so often are); I admire a man who can admire a chihuahua and not have to check he’s still got a willy.

Anyway, early in the pageant, we passed a group of three (their faces inevitably lit up by her preposterous, tiny, blonde form) and I said hello. And then, immediately, I thought, how nice. How nice that greeting complete strangers mid-ramble is the thing to do. Why is it that country walks have abnormal rules of hellos? If you walk past a person in the street, even in the village, let alone anywhere urban, you wouldn’t say hello unless you know them; if you walk past the same person in a field while walking a dog (or not), you’d probably seem quite odd (or a cause for concern) for not at least acknowledging them.

I pondered this as we cornered the field; I will never forget my first experience of the London underground (or London in general, actually); sitting in a full carriage while pretending to be completely unaware that anyone else is in there with you is a fine art, and very, very funny to a wide-eyed outsider. You can look down (ideally at a book; more commonly at a phone), or slightly up (a third-eye sort of space; a thinking space or a blanked out gaze), but you absolutely cannot look straight ahead of you, because the person one metre in front of you might accidentally also look straight ahead of them and then your gaze might meet and then you will both die.

This brilliant Smack The Pony sketch suggests what can happen when there is absolutely none of the usual low-level tension which builds as two people approach the middle of a massive green space from opposite directions. 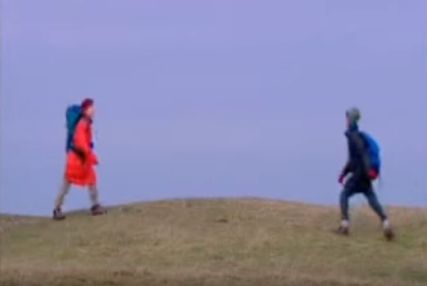 This is the ultimate (often affected in urban areas) lack of awareness of the existence of another made manifest; only one’s self being real; all earth available and space abundant yet two atoms colliding in geographical pinpoint and time. Sometimes ‘hi’ is the only appropriate response to the simple, absurd fact that you and another human have found themselves in the same otherwise-empty field at 3.53pm on a Saturday afternoon. It’s best not to deny it or stare at your phone.

I distinctly remember making a life decision at a ballet class. My new idea, aged 12 or so, was this: if ever I couldn’t quite remember someone but thought I’d met them, or (more often) knew I’d met them but didn’t know if they’d remember me, I would bust forth a verbal hello, or at the very, very least (I allowed myself some scope) would smile an unmistakeable smile at them. My thinking was sound: I didn’t want to come across as unfriendly; I would say hello and smile, so that they knew I was not stuck up or rude.

This little jump towards wisdom (the usefulness of knowing how to condition one’s outer appearance to better reflect one’s inner while safeguarding against misunderstanding) served me well. Fresh from being diagnosed as an ‘ice queen’ by a boy in my class (who simultaneously declared that I had a brilliant bum), I had a new found awareness of how my shyness could come across as unapproachability. This kind of recognition is massively liberating; I knew I wasn’t stuck up, but other people might not know it if I didn’t make massive efforts to demonstrate otherwise. Ever since, I’ve harnessed my power of going up to complete strangers and smiling at them, so they know I’m not intimidating (even if in reality I am feeling nervous myself). Cool, huh? Confidence is all a trick.

I was never lacking friends or acceptance at school (though a boy once called me frizzy four-eyes, which was metaphorically accurate, at least) and had no problems in that department; in fact I knew things were looking up when the most popular boy in secondary school (Afro Caribbean and beautiful; in the year above, no less) mentioned to his people that he rather liked the look of me. This eventually got back to me, and our romance was consummated by medium of shy glances at each other when occasionally passing each other across the concrete, or eyebrow flutters through panes of glass between lessons (him strutting across courtyards, me fascinated). I don’t think we ever actually said hello to each other, though my friend did me the honour of writing ‘MA loves you’ on my notebook and enclosing the statement with a heart.

But I was quite shy when I was younger. A high point was being asked by my best friend’s Mum what I would like to drink and being able to respond only by standing on one leg and smiling at the floor. I wrote to an agony aunt when I was about 10. Nobody knows this. I wrote to a woman at Girl Talk (a magazine for straight talking, style advice and competitions, usually with some nail varnish sellotaped to the front) and asked how I could stop being so shy. I wish I had a copy of my letter – I would be so embarrassed to read it now – but I remember posting it and hoping for the best. You could state that you didn’t want your letter to be published, ever, and this had encouraged me. In response, I received a two-sided typed A4 piece of paper, folded into quarters and full of grown up perspective which was very enlightening. The author had a kindly, no nonsense tone a bit like a school nurse (but not the one who offers you a plaster if you’ve got a headache) and the main takeaway, for which I am eternally grateful, was this: everyone is far more concerned with how they are coming across than how you are. This was a massive epiphany for a 10 year old, and confirmed something I had begun to suspect already; no one really cares – everyone is nervous or worried about what others think of them; too much so to carry enough headspace to think about you. What a relief. I lived merrily on; I wish she’d known how much it helped.

Snall notice: If you happen to like my kind of nonsense, please do step up and move your bookmarks (or re-sign up or whatever it is you have to do to follow along – sorry for the lack of technical certainty); I’m moving this blog as of NOW (well, gimme 5 mins) to >>>www.teaandepiphany.com<<< and I’m taking all my semi-colons, confusions and pedantry with me. Kthanksbye. See you there?

One thought on “The Country Hello”