I’m in the sort of place (though imminently won’t be, as I’m on my way home within the next 24 hours) in which people are languid en route from A to B, they stop and dawdle and look to the left and the right at all the colours and ornate doors and floaty dresses swaying in the breeze (though we shouldn’t look anywhere but at the floor, perhaps, since health and safety isn’t much of a thing here, unless you take an importantly-positioned plastic bottle as enough of a ward against your head being spiked, and a string barrier enough of a gesture towards the community’s hope that a person won’t fall down a two-metre hole where a pavement has collapsed). Pavements seem, on the whole, precarious; they seem to simply fall down, upon looking at the evidence. Maybe it’s the earthquakes. Nothing a bit of make-shift wood can’t make a bridge over, anyway; otherwise simply a cone (or, if you don’t fancy the long-jump, a detour) will do. 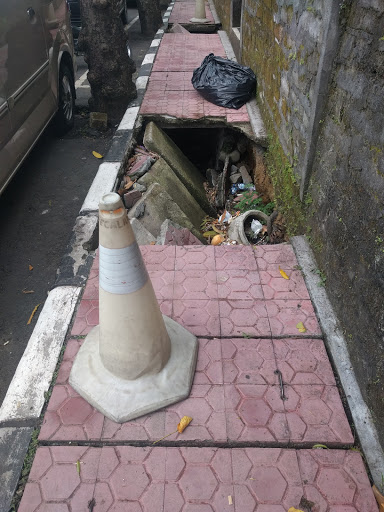 I thank my lucky stars that all two of my ankles are intact (really, I’m grateful), and that I am grade A standard when it comes to walking at high speed on a 45-degree slope (left to right, that is; not incline) of cobbled stones, and at jumping/lunging (literally, all gymnastic skills come into play) simply when walking from residency to attraction. I have worn the same pair of flip flops every day for well over a month, something my past self would have found useful to know in advance when packing (though it’s good to have options, I think/thought).

But why oh why oh why do people walk so incompetently? I didn’t know I was THAT fast a walker (I knew I was a bit, but really, this is an epiphany itself; I could probably compete in the Olympics in comparison to most people in this town). I actually found myself asking the back of the person in front of me’s head, earlier, how it was they were actually moving at all, when they seemed so seduced by the idea of remaining stationary. Maybe they were walking through water, and I just couldn’t see it. I am not grumpy, though (truly) – I admire those who can walk through life while almost going backwards as though there is no rush whatsoever. It’s not even that I am so often (always) running late; even when I have no appointment to meet I seem to glide. I think my legs like the movement, I don’t know. I suppose the result is that I get more done.

These people are simply fascinating, even if I do risk death from passing motorbikes each time I jolt out into the road to overtake them (pleasant smile on my face; no road rage here).

What does slightly pee me off (and I am queen of calm, so really this just results in a slightly flattened eyebrow line; not a full frown), are those that simply stand (at full stop, perhaps considering their route; perhaps having a breakdown) squarely in the middle of the pavement. It has not crossed their mind one iota that they might, potentially, perhaps, just possibly get in the way of other humans and that a really sensible idea might be to pick one side or the other on which to take up space with their thinking body. They have decided to stop, quite simply; no other selves are held in their momentary falter; no thought of collateral damage. They will stand there for hours, until I pipe up very Englishly and sweetly, ‘Excuse me’ (because I like to educate people); as if the gale-force wind of my stride hasn’t alerted them to another being (me) heading towards them, they have absolutely no clue. Sometimes I practically put my hand on their shoulder as I delicately balance my way past them without falling off the kerb; there there, you weren’t to know, I almost say.

They should have known.

I’m all for owning your body’s place, though; standing strong, shoulders back, not cowering in the face of others – just a bit of an awareness of a place being made for two, or even multiple members of the public; that’s the goal I would like to edge others towards, if I ruled the world. (Don’t get me started on the woman who sat in the middle of the swimming pool reading her book while I painstakingly angled my lengths around her, obviously struggling in the small pool – which, incidentally, I am dreading saying goodbye to – desperately trying not to splash her book [but wondering again, about the place for education]).

I liked the way a Balinese shop assistant held her body, earlier; she was far back in the shop – I called hello as I fondled a painted coconut and considered a pair of earrings – and she greeted me gently in return, full-on topless, a baby attached to one breast, matter-of-fact, here I am. She was blissed out on the exchange; her one-year-old boy (I asked, as I sat down on the step next to her and we whispered our negotiations), a pout-lipped, golden-skinned cherub was moved, afterwards, from nipple to play-mat and I wished her good luck with her baby (I’ve been here too long; everyone wishes each other good luck in life, tapping any received money against the wall or furniture) as I swung my gifts out of her shop and wondered how old she was.

The Balinese are modest in the temple but unsqueamish in general – a woman mustn’t visit a temple when menstruating, but not because it’s ‘dirty’; rather because the blood of a woman is so deeply powerful it messes with the holy energy of the ground. When I go for a hair massage (it’s a conditioning treatment called ‘cream bath’ but really I just go because I find the sensation of my hair/scalp being played with a sort of ecstasy), I am actively, unnecessarily undressed by the masseuse; when I had a green tea clay scrub and massage today (it’s my last day; I went wild; in general I’ve been quite restrained, guilt guilt guilt…), which culminated in a copper bath full of flower petals next to rice paddies (for £20), my entire body was massaged, and I mean entire. This is fairly normal in South East Asia, so I knew what to expect and went with it, but I imagine in the western world a person might sue.

Anyway, I like the physical touch’s place in places like these; that it is a given that a person should be touched; that it is for health and vitality. Too often, at home, it would seem such a luxury or frivolity to pay for a stranger to essentially stroke your face/scalp/body/feet and I still feel that, just slightly, but here even a person’s feet are treated with gentle kindness, and the simple getting-on of cleaning, scrubbing, bathing and flexing is perfectly important. Anyway, wish me luck in life and with my ankles; that I haven’t jinxed them by mentioning their good grace and stability in the face of un-smooth roads and routes inclined to be inclined. I have one day left and many more people to overtake, or learn from.