There’s something deliciously arrogant about going up in a hot air balloon. I’ve thought about it quite a lot, recently. I think hot air balloons have slightly been haunting me recently (a little more whimsically than the haunted feeling I had yesterday, when a man was following me; I’ve never felt so eerily looked at and visually pierced, and been so unfeasibly well-followed through the streets, though my racing heartbeat, albeit in a crowded place, quickly turned to rage and the content of his garbled words remain a mystery); I have seen them a lot, and not just in the sky.

Imagine the boldness of simply deciding to go upwards and leave all your friends and foes miles below (miles? I really have no sense of how high they go; my understanding of distance is roughly as lacking as my understanding of volume, which during my time spent mixing skincare products in jugs and decanting into containers, has been revealed to be alarmingly off*). You’re not even pretending to fly, or to be in anything particularly technologically robust; you’re just in a thing which floats, bigly, and drifting. You both marvel up there, I imagine, and are marvelled at; it is impossible not to look up when you see a hot air balloon dreaming its way through the sky. I have to admit I had an overly romanticised view of it, though; I thought they would be small and intimate places, rife for toppling out of and leaning from when pointing out all the houses and sheep and towers below (for what else is there to do? Or maybe the real hot air balloon conaisseur looks up rather than down, taking pleasure in being so deeply further into the sky, drinking it in in all its near-sun proposterity** – in all reality I think this would be the case for me), but I think I have discovered (when clicking out of curiosity on a website, so close did I come to my need to try it) that they are mass-group affairs, often, and you book a ticket along with millions of others (or 16).

Bulbous and red; rainbowed like those artist’s-palette umbrellas I so fantasise about owning one day; a modest, wicker basket dangling from boy-scout-knotted strings (maybe rope), the almost inevitability of landing in a tree but being good-humoured about it; the silence which co-exists with the deafening roar of some kind of fire (for it has to stay up somehow, I suppose);  the coming down and daring oneself to jump out 10, no 12, no 4 metres from the ground and reminding yourself to bend your knees because everyone knows this is the way to land and not break your back. I think it was my older brother who once told me if you ever fall from something high, you should slam your arms down and smash those as a sacrifice (to break your fall) rather than break your back. I think he’d heard it at school, or something. I think I’d be more likely to simply decide I was going to be fine and sort of risk it; controlled arm flailing does sound clever though.

There is also the niggling shame, at stake; the shame which goes with trekking out to some important monument or rock formation, and feeling you’ve done all the wondering you can manage after only a few minutes; the flow of impression is stemmed by time itself, and not necessarily very much of it (so you wonder what on earth is wrong with you). I wonder if being in a hot air balloon would feel like that; if it would get dull after a while. Our brains are so hideous at remaining amazed; we adjust so quickly and become blasé when faced with a new normal. I don’t think I’d ever be bored on a hot air balloon, though.

Or would you feel a sense of missing out, along with the sense of being in an exalted dreamstate; that everything down there so entirely carries on without you? You are lifted, held in the palm of God’s hand, and not at all part of life, though you can see all of it, maybe even drop things down (messages, hints, banknotes). It’s a breezy sort of blessing; elements whipping in your face, or are you protected by the canopy? What does it smell like? Burning? Fresh air? Is it freezing? Can there ever be a ladder long enough, folded an infinite number of times into itself so as simply to unravel downwards, if you change your mind? Would you not, automatically, fall in love with whoever was there with you? Is there an instructor, always, or do you do it alone? Would it hurt? Would people come and visit you, afterwards, their chins resting on the rim of the basket as though around a hospital bed, telling you they’ll be OK to carry on, that they’ll stay a little longer, themselves, summing you up? There must be a point of possible return; at what point can you consciously decide to start coming down, or should you? I think I’d like to know what it’s like, then come down – just to know (though it’s easy enough to taste***). 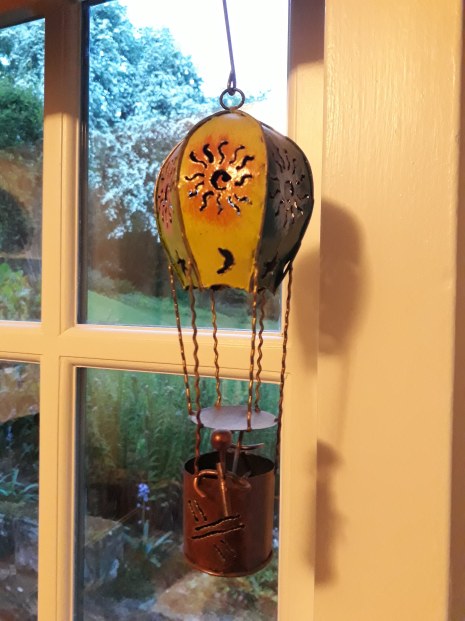 *Though I do have an alarming knack of fitting 200ml of product into a 150ml bottle, for example, thereby longchanging all of my customers all the time constantly always like a terrible business person.
**Again not totally clear how distance works.
***So many ways to stick out a tongue.